Are online advertisers getting desperate? I don’t know, but I’ve clicked on more text ads in the last two months, than all the ad banners combined. Collectrix is soon going to provide our own text-ad service, so let me know if you know of a good ad-management system.

Take a look at the following email I sent to the GnuPG (GNU Privacy Guard) team. I encourage my readers to send similar emails to organizations or websites that put up “no war” banners.

Who do you expect to protect these human rights? Libya, the brutal dictatorship elected to Chair the U.N. Human Rights Commission, or Iraq, Chair of the U.N. Disarmament Conference? Which member of the human rights commission do you expect to champion human rights — Cuba, Vietnam, Syria, Saudi Arabia, or the slave-holding Sudan? Or do you support the “human rights” of the UN officials to exploit Iraqi suffering for their personal gain? There is only one body in the world today that supports the rights of both the victims of terrorism and the victims of dictatorships with more than hollow resolutions: the United States. Towards this end, please note the attached image of the American flag, which you may link to your favorite branch of the United States Armed Forces.

Until your website stops supporting dictators and opposing justice, I will not endorse your views by using your products. If you do not believe that my portrayal of your position is accurate, I look forward to an explanation or elaboration of the “official” stance of the GnuPG project.

EPA agents are being used a personal servants, more proof that Saddam worked with Bin Laden, my former economics proffesor Dr Reynolds on his experience at the Dept of Labor, and a very informative interview of Victor Davis Hanson about Iraq, education, and left/right bias in universities.

Thanks to Hootinan for this photo of 18-year-old Ahmed Khatib, who blew himself up for Allah. He’s misinterpreting the "peaceful nature of Islam", right? Some people would beg to differ. Any religion can be used to justify violence and oppression — once people are brainwashed into believing that their own senses and reason are subordinate to "faith", it’s not hard to get them to follow the orders of some mystic. However, there is only one faith in the world consistently being used to justify violence and brutal regimes on a worldwide scale — Islam. Again, the lesson here is not that the Qur’an has some magic line that makes its followers violent — but that whenever reason is systematically subordinated to faith and life of individual sacrificed for some "greater cause", it is only a matter of time before that cause is used for violence — and that lesson is just important for Americans as it for the Arab world.

Last year, I bought an IBM keyboard from CyberRebate, which sold stuff at many times the cost of rebate value, promising to give you a 100% rebate in exchange for paying many times the actual worth of the stuff it sold. If that sounds like a pyramid scheme, it was, and CyberRebate went bankrupt (over $11mln in debt) the week before it was supposed to ship me my $110 check for my $15 keyboard. Even worse, the keyboard driver only worked on Win98/NT, which says something about the crappy companies IBM allows to use its brand name.

Anyway, two weeks ago, I won an Ebay auction for a cool new Logitech keyboard, which was shipped by UPS, and finally got here yesterday. Unfortunately, I was taking a class when the brown truck came by, so I couldn’t be home to sign for it. Meanwhile, my fourth bike was stolen from outside my apartment. This was my third bike stolen this year, all from right outside my apartment. It was a cheap, broken down bike, not worth $10 (after having had two expensive bikes being stolen, I learned my lesson) but my regular transportation is also broken at the moment, so I have to walk a mile to class right around finals. What’s even force is that I had a class right around the time the keyboard was to be delivered today, so as I walked home in my jeans and 82°F, I was hoping to get back before the UPS came by. About ¾ of a mile from home, I saw the UPS truck pull away from my home street, and suddenly became sufficiently frustrated with the $#*$& bastards who stole all my bikes to run half a mile after the truck, track it down in a neighboring block, and proceed to get my package delivered in propria persona. I am still out $110 and four bicycles, but with a shiny new keyboard, I feel much better.

In other news, in my foreign policy class today, we were discussion US unilateralism, and I gave a passionate defense of US unilateralism, bashed European collectivism, Bush’s fence-sitting, AND Clinton’s pragmatism. With the possible exception of the two political thought finals next week, I will never again have to regurgitate Statist BS in a commie POLS class. From now on, you’re only going to hear 100% uncensored, unplugged, uncut greedy capitalist propaganda. Down with collectivism and pass the ammunition!

(Btw, I just plugged in my Logitech Internet Navigator keyboard, and not only am I able to use two keyboards at the same time, but Win XP’s native driver has built-in support for the multimedia keys! The keyboard has a great, albeit slightly too light touch, and in addition to my iFeel mouse, and Wingman joystick, Logitech is the only hardware company about which I don’t have any complaints.)

Thanks to Keenan for this and this story of modern art being used as a torture device. Now it’s obvious to everyone but pretensions snobs that modern art is garbage, but it turns out that the Spanish nationalists actually used it to torture prisoners. If share my strong feelings about modern art, you can try my "Art or Fake" gallery to see if you can even tell apart fake modern art from…fake art, or go to my gallery of great art. Here is what one of the "artistic" prison cells looked like: 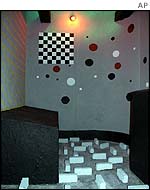 Check out today’s Cox and Forkum on the topic of my earliest post. Then read Turning Iraq Into Another Iran. Also interesting is an acount of media bias at Hootinan.

Michael Moore is a big fat liar. Take away his Oscar, and don’t forget:

Yes, Fox reporters are so popular that they have their own fan sites, and Jennifer looks pretty "fair" and balanced to me

Any day now, Iraqi women are going to riot against having such good-looking American women walking around without rags on their heads…

Drumming their chests and whipping their backs, hundreds of thousands of Iraqi Shi’ite Muslims swarmed through the holy city of Kerbala on Tuesday on a pilgrimage suppressed for decades by Saddam Hussein. Marking one of the most important events of their year, some men slashed their heads with knives and left bloody wounds in a ritual display of readiness to die for Imam Hussein, grandson of the Prophet Mohammad. The imam was killed in Kerbala in AD 680.

Are these the "noble Iraqi people"? If we really want a peaceful Middle East, it’s time to bring some of that eeevil western imperialism (read: secularism and private property) to Iraq, rather than allowing rabid Islamic fundamentalists to spew their religiously motivated hatred of rights, reason, and reality. Liberals have it all wrong: they blame the conservatives for their "colonialism" but Bush, with his new-age Christianity, will never understand that the true nature of the conflict is western secularism vs. religious fundamentalism.