Where is my free oil?

Oh, speaking of Stupid Stuff Liberals Say, here is a prediction a liberal I was debating sent out shortly before the war:

"Let it be known [that] the people of Iraq will do everything in their power to keep our government and armed forces out. Women and children will take arms protecting their land from a foreign government, just as we would if we were invaded." 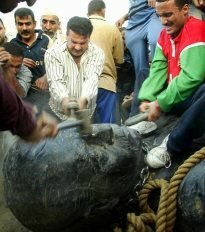 Commentary on “America vs. Americans”

Leonard Peikoff recently gave a speech at the Ford Hall forum titled "America Versus Americans." I’m not going to summarize it, because you should watch it yourself. Several points stood out. First, while it’s easy to get wrapped up in the outpouring of support for the war coming from moderates and conservatives, we have to put things in context: in many ways, America is fighting the wrong war for the wrong reasons.
While Dr. Peikoff explains the reasons for our moral failures sufficiently well, I recently experienced the views he mentioned firsthand. I work with two students — a Russian exchange student and a typical Texan bible-thumping conservative. When the topic of civilian causalities came up, the Russian was vehemently anti-war and claimed that even one civilian casualty was killing, which was wrong per se. Now, we are normally on good terms, but I almost ended having a shouting match with him right in the middle of the office. I asked if the victims of Saddam Hussein counted as murder too, and he gave the usual liberal rant about evil US occupiers, violence wrong in all forms, etc, etc, until I refused to listen anymore and he stormed off shouting about western imperialism, Dictator Bush, etc, etc. At this point, I took up the conversation with my Christian coworker, giving him the same arguments as those found in Stop Apologizing for Civilian Casualties. In reply, he questioned whether it was more important on balance to risk the lives of American soldiers or Iraqi civilians. (!!!) I asked him why we were in the war in the first place, and he have the usual altruist reply (even using biblical references) that our sole motivation was "to free the Iraqi" people, and rejected any "selfish" motivations such as being free from terrorism. At this point, I gave a passionate defense of the proper motivation for the war, the idiocy of valuing civilian lives over that of our soldiers, but that is beside the point. The incident was indicative of how conservatives are just as blinded by religiously-motivated altruism as liberals are by the secular kind from seeing the real nature of the conflict: pro-individual western secularism vs. collectivist fundamentalism.
I did not agree with everything Dr Peikoff said however. I am tempted to agree that Iran is a more worthy target of regime change than Iraq, and that the primary reason we are in Iraq is that it is much easier to portray Saddam as a just another "corrupter of the peaceful nature of Islam" and rely on the existing public support from Gulf War I. However political reality makes a war with Iran impossible, and I think that Iraq may be more successfully used to influence the rest of the Middle East if we take an approach of peaceful reconstruction into a US-friendly democracy, than trying to intimidate the Islamic world by turning Iraq into a nuclear wasteland, as Dr Peikoff would have us do. If it were politically feasible (and if it were, we would not have a terrorist problem in the first place) nuking Irag may scare fundamentalists into behaving, but it would not result in long-term positive change. Creating a free democracy in Iraq on the other hand, will put continual pressure on other Middle Eastern governments, and that may be a more effective strategy in the long run. After all, even Al Jazeera admitted that Saddam’s fall sends a warning message to other Islamic dictators.

Check out Mountain Health Care, R.I.P a sad story about the latest victim of antitrust…